Hunter of icons: Interview with the artist Gil Goren

Last summer, alongside six major international artists, Gil Goren was invited to participate in an artist’s workshop run by the Eileen Kaminski Foundation of Art (ESKFF) which took place at MANA, the prestigious arts complex in New York. During the process, Goren was exposed to the New York art world, and took part in a group show at the Mayson Gallery where he was chosen to become one of its resident artists. The project that he created during his residency was based on a line from the last song of Freddie Mercury, lead singer of Queen, and became part of its permanent art collection.

Color, a wealth of information, texture, and the incessant noise of the urban environment are the salient aspects that find chief expression in the works of Gil Goren – designer, Pop Art artist, and veteran adman who lives in Haifa. Goren’s first solo exhibition in 2014 presented different works relating to culture, environment, language and the lively urban landscape. His works are made using a special technique that involves drawing, photography, and three-dimensional printing on materials such as paper and wood, and present a colorful mosaic with phrases that construct the meaning and concept of the work.
“From all the modern art movements, the one I connect to most is the pop art of the sixties. My heroes are the group of Andy Warhol, Jasper Johns, Roy Lichtenstein and Sir Peter Blake. My work is a dialogue with pop art, cubism and futurism, and to a great degree street art. Using these components, I create a connection between the viewer and the artwork itself, the message and the place. I’m constantly surprised by the richness of the color in the objects which I exhibit – objects that the audience perceives as transparent and gray in their everyday life,” says Goren.

Goren’s works are exhibited in galleries around the world, including the United States, the Netherlands, Hong Kong and Australia. In the coming year, his work will feature in exhibitions and art events in China, the United States and Canada. His early works caught the eye of curator Shirley Meshulum who laid the foundations for a new exhibition in his hometown at the Grand-Art Gallery in the Grand Canyon. The exhibition bearing the name “The city – downtown” introduced a series of works that relate to the artist’s favorite cities, New York and Haifa.
“In every spare moment, I found myself going downtown to collect photographs,” Goren recalls. “In the rush of life we tend to lose the real things, and so, I photograph the invisible things that people pass by without paying attention. In the beginning, I was anxious that the work would be too similar to works about New York, but thankfully, the Hebrew language makes it unique, and the dominant colors in the landscape are different”. 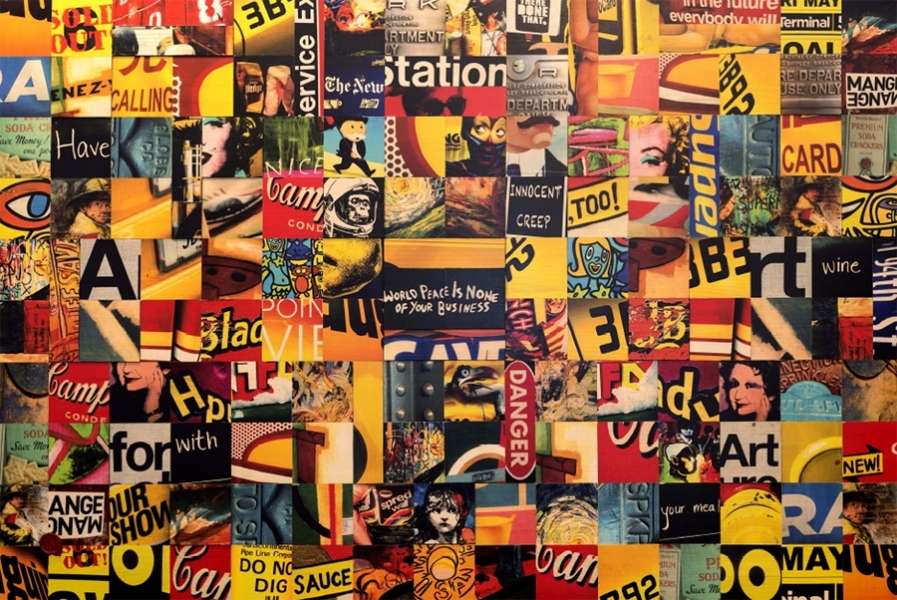 The interactive installation Goren presented at the exhibition, invites visitors to arrange and stick dozens of photographs of different sizes printed on wooden blocks to create one image built from hundreds of units, consisting of visual content with images and texts captured by Goren’s camera.

Last October, Goren exhibited at the Matsart gallery in Jerusalem owned by Lucien Krief. The exhibition, entitled “Holy City” inaugurated the new wing of the gallery. It included 20 new works inspired by the cities of New York and Jerusalem, and presented the latter from Goren’s unique perspective, through a unique prism communicating with the place, its history, Judaism and even Zionism. 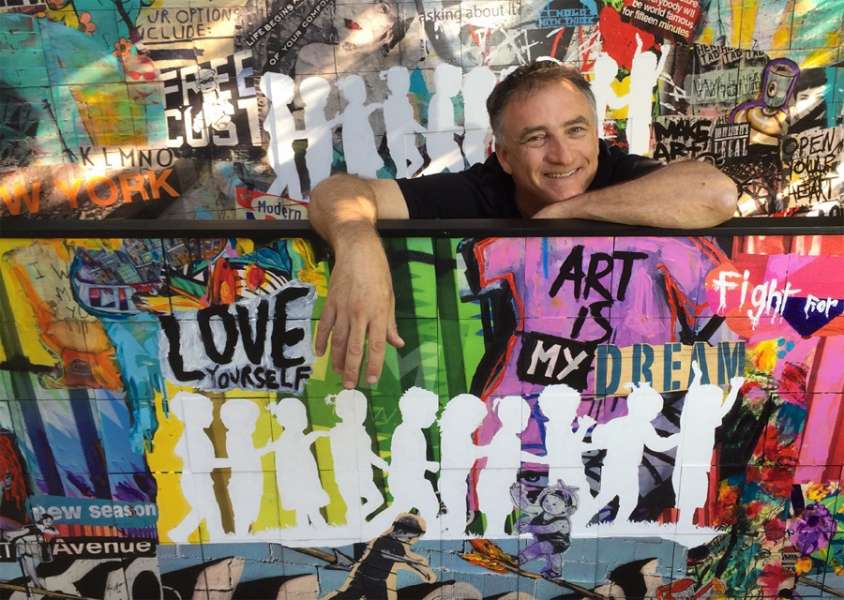 In a number of interviews that you’ve given, you define yourself as a “hunter of visual icons”. What is the origin of your work?

“I’ve always felt that for most people life just passes them by, that most of the time, most of us simply don’t pay proper attention to the small details that make our lives what they are, and the same can also be said for the endless race of urban life that exists amidst the city’s streets. From this insight, I decided that my work should try to recreate the world through my personal perspective, showcasing all the transparent and invisible elements that make up the urban landscape. ”

“For me, an authentic creative process must be connected to the personal experience lived by the artist. For instance, you cannot describe a flower without smelling it yourself, without planting it, watching the process of its flowering and its wilting. Of course, there are artists that find different ways to describe landscape, people, objects or dreams that never existed in reality. However, in my works, the process must be related to the experience itself. This hunt for all the elements that make up the work is an integral part of the work itself: every element in the work is something I touched and researched, and sometimes even reconstructed to create something new.”

“In January 2017, I’ve been invited to exhibit in three different shows in New York, one of which is at the Mayson Gallery, which is actually the second exhibition I am participating in since they chose me to become the gallery’s resident artist. Another very interesting show that I’m participating in is called: No more black targets. I’m exhibiting alongside 18 famous New York street artists and a French street artist. The exhibition is raising awareness for the issue of shootings of black civilians in the US, and each artist is giving his artistic interpretation on a black NYPD shooting target. The exhibition will begin in New York and will run in various galleries in the US”.
Towards the end of January, you are also going to exhibit in the World Trade Center in New York. Impressive.

“Yes, that’s something else entirely. During my many walks in New York, I met a couple of amazing friends who deal with street art from its academic side, and over the last two years I’ve kept in contact and every trip to New York, we meet up and discuss ideas for cooperation. They turned up to a recent show in New York along with some well-known street artists and we struck up a strong connection, that has evolved into a fruitful and productive relationship.
“The upcoming exhibition called “Street to Tower” includes 40 leading New York urban artists, such as Ron English, Crescent, layer cake and others, who are all dealing with the relationship between the city streets and the four towers of the World Trade Center in New York. The works selected for the exhibition will tackle the relationship between the street and the big city, with each artist being asked to create a work that deals with the Big Apple, the flame of the torch or the crown of the statue of liberty.
“My work shows a personal version relating to the issue of freedom, growth and power of the city of New York and the relationship between street and the towers of the World Trade Centre. To my delight, I was asked to create four different sculptures for each tower. The first statue, with a height of 2 meters, was inspired by a verse in the book of Zechariah: “And the city streets filled with boys and girls playing in the streets” and introduces the idea of a skyscraper surrounded by images of children playing on the urban landscape.”

Goren’s new sculpture will be launched at the Hotel NYX Tel Aviv during January 2017 and will be displayed for four days before being sent to the exhibition in New York. The sculpture will feature alongside other works by the artist selected as part of the architectural and interior design process of architect Ari Shaaltiel, based on his desire to select works of art that complement the hotel’s urban vibe and are integral to the international contemporary art scene. 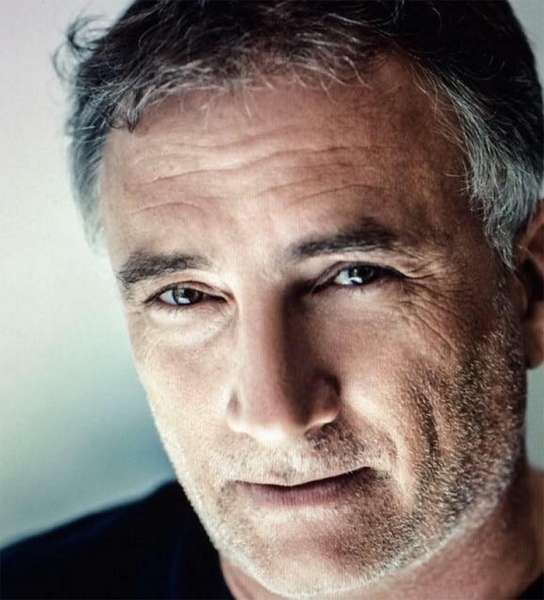